Bix Medard points towards 'la nouvelle chanson française' in an electro-acoustic down-beat style. Bix Medard started early 2008 as a musical collaboration between Peter Clasen and Bix. The electronics and new-wave-influenced bassplaying by Peter Clasen are combined with the whispering voice and flute playing of Bix. Based in Brussels, Bix Medard reflects the contradictions and plurality of today’s society, a multicultural, contemporary and electronic world, associating one of the oldest instruments of the world, the flute, with electronic sounds and poetry, melody and dissonance marry in dark and light moods. The texts suggest individual choices in life, memories of past experiences at the borders of reality and imagination. Both being visual artists, Peter Clasen, leader of the electronic Brussels based band Neven, and Bix, painter and musician, collaborate with other artists, photographers, dancers, painters, designers, becoming a meeting point of various art forms. First CD released in January 2009. 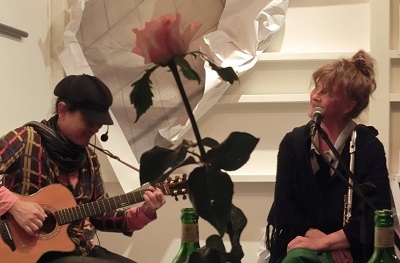